In skateboarding, you’re never bigger than the streets - Rob Dyrdek

If anyone knows how big the streets are, it’s Rob Dyrdek. As a professional skateboarder, they were his domain, the kingdom he rode through and attempted to conquer on his four-wheeled steed.

The streets were his master and his mistress and they enabled him to acquire the skills and assemble the arsenal of tricks that he needed to keep moving forward and become one of the most renowned riders in the history of skateboarding.

But even though the streets will always be bigger than skateboarders, there’s a new generation of skateboards that are determined to challenge Rob’s claim about size.

Actually, that’s not quite true, as the new boards aren’t part of the next generation of skating, they’re more of rebirth and reinvention of the boards that were vital elements of skateboarding history.

Without longboards, there wouldn’t be any skating, and the fact that they’ve now become a board of choice for riders all over the world just proves that the more things change, the more they stay the same. Longboards are an access point into, and an easy way to enter, enjoy and become part of the world of skateboarding.

While they’re relatively simple to get to grips with, longboards have a habit of worming their way into your soul, and the more time you spend riding them, the more time you’ll want to spend learning how to ride your longboard like the professionals do.

That’s when you’ll begin to make the transition from cruising to carving and will find yourself starting combining both longboarding disciplines.

To aid your journey into, and make it easy for you to master the art of carving,  we’ve found five of the best longboards for carving, so that you can just grab your new board of choice, hit the concrete, and carve the streets to your heart’s content. Let’s skate... 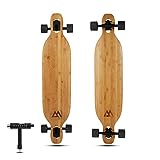 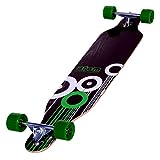 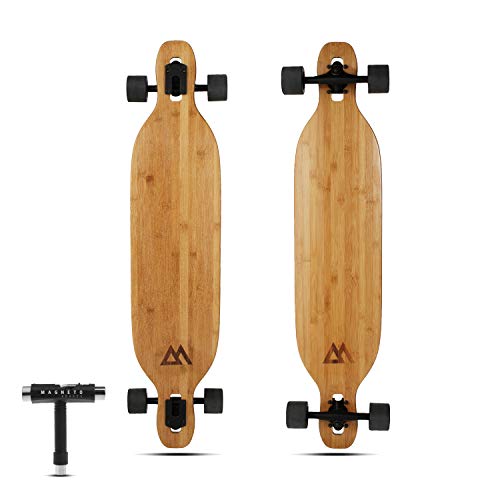 Form, function, and aesthetics are the three guiding principles behind the design of every Magneto longboard.

Fashioned in the eternal sunshine of Carlsbad, California, Magneto’s boards are made to cruise and carve the street the way that the first generation of skaters did, with style, grace, and eye turning aplomb.

After all, if you’re going to be turning the streets to dust on your longboard, you might as well look good while you’re doing it.

Magneto’s three-ply bamboo and fiberglass deck combines all the flex that you’ll need to negotiate every hill that you want to carve down with inbuilt durability which means it won’t let you down when you need it most.

Forty-two inches long and nine inches wide, the deck has all the room that you’ll need to learn and conquer the art of carving, and the drop through trucks and cutaways make the board smooth to ride and prevent wheel rub, so it’s easy to turn, and when you do push into the turns, you can go as tight and hard as possible and Magento’s board will always stay on course.

The seven inch Paris style cast aluminum trucks and high rebound wheels will help you feel every bump on the street and enable you to fly past them without a care or worry in the world. 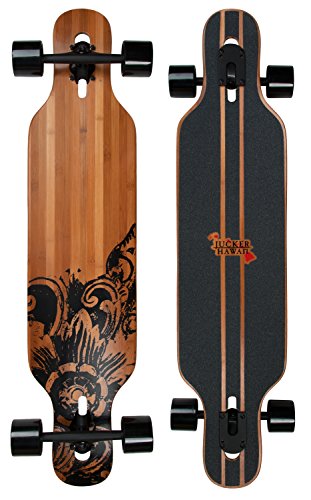 Owned and operated by a couple of skating and surfing fanatics, Jucker Hawaii was formed to enable its founders to live out their dreams of feeling like they were always riding the waves and the perfect valleys of the islands whenever they were on one of their longboards, regardless of where they might be in the world.

Made to be the all-rounder that most longboarders fantasize about, the Hoku is an all-weather longboard that’ll help you to weather any skating storm that you find yourself caught in.

At just seven and half-pounds, this forty-two inch long and nine-inch wide longboard is light enough to glide down any hill and every street and long enough to enable you to find your ideal riding style and position while you’re attempting to shatter all manner of skating records and stunts.

Built from bamboo and fiberglass composite (the exact ratios of which are a closely guarded secret), the Hoku’s double kicktail, deck cutouts, and drop through trucks make it perfect for carving, tricks, and cruising.

It’s all the longboard that you’ll ever need to vanquish the streets and crush every longboarding technique under the sun.

No-one knows what skaters need and want from a longboard as well as skaters do, and Jucker Hawaii’s longboards are made by skaters for skaters.

The Hoku was designed to carve the hills, cruise the streets and leave skateparks in its wake, while making sure that the person guiding it has the ride of their life.

Nowhere is safe from the Hoku’s reach, and there isn’t a path, sidewalk, or park that won’t tremble in fear when it glides through, and by, them. 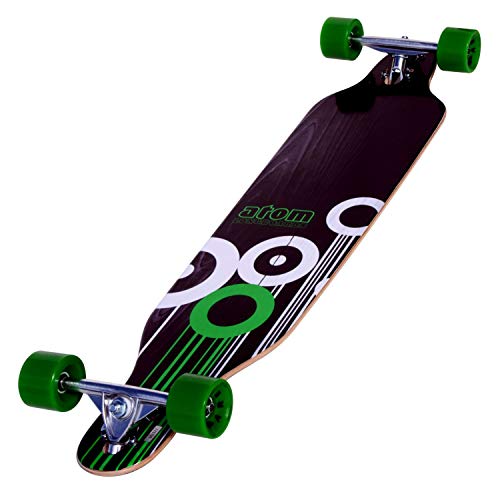 Atom believes in doing things the old fashioned way. They don’t employ any middle-men, sales representatives, or marketeers, they just let their longboards speak for themselves.

Obsessed with the ride, all that Atom does is make longboards for skaters who are as fanatical as they are about cruising and carving their way through life as they are.

A nine ply Canadian maple board (which means that’s tougher than a team of seasoned lumberjacks), Atom’s Drop Through is forty-one inches of devastating carving power.

Made to be easy to push, once you’re rolling all you’ll want to do is carve, and thanks to the deck cutouts and the design of the board, you’ll be able to get nine and a half inches of turning leverage, which means that this board will turn tighter than a Ferrari at Daytona and looks just as good as the Italian supercar does on its very best day.

The cast aluminum, longboard trucks, and super heavy rebound, wide-rimmed wheels produce all the speed and power that you’ll need to hurtle downhill, while the concave, nine and half-inch wide deck that’s covered in silicone grip tape will give you the confidence to carve into every curve with enthusiasm.

Smooth, precise, and built to last, Atom’s Drop Through longboard only knows how to do one thing, and that’s skate like it was being chased by the devil himself.

And when you’re screaming downhill and carving up the road surface in a rapid and frenzied fashion, you’ll be glad that Atom didn’t hold back and pushed the limits of what it was possible to do when they designed this board. 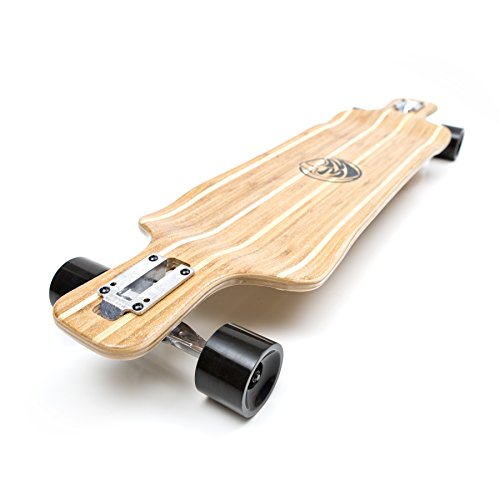 White Wave longboards was born from the belief that every skater should know what it feels like to catch a perfect wave while they’re riding on concrete.

Their founder Josh believed, and still believes that price shouldn’t dictate the quality of a longboard and set out to ensure that everyone,  whatever their financial status was, could ride a longboard that would make their soul soar and their heart sing.

And that desire to draw a line through, and wipe out, economic disparity in the longboarding world, made White Wave a skating force to be reckoned with.

Thirty-nine inches long and nine and a half inches wide, this Bamboo longboard is made from multiple layers of bamboo and maple ply, which make it flexible, stable, and strong.

The drop design of the deck, double kicktail, and cutouts make it an ideal carving missile that won’t falter or deviate from the course that you set it on and will stay on target for as long as you want, and need it to.

And its cast aluminum trucks and super heavy rebound wheels mean that you won’t miss a beat of the streets rough and ready heart and will be able to navigate any and all bumps or obstacles in your path with ease.

The White Wave is, as Iggy Pop once sang “a street walking cheetah with a heart full of napalm”, and is the longboarding equivalent of an F-16 with its afterburners fully engaged. It’ll take off like a rocket and has a nimble precision and degree of control that’s incredibly rare in the longboarding world. In other words, it’s a carving monster. 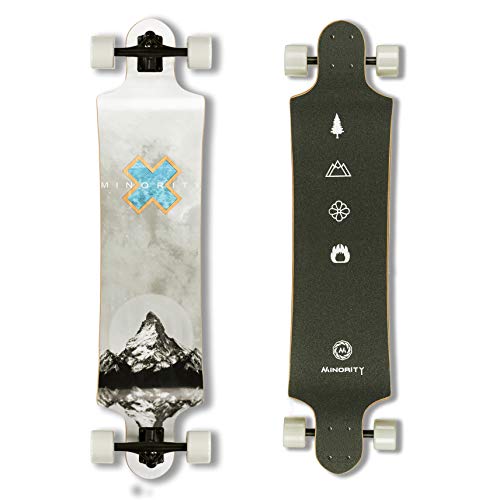 A name that’s unfamiliar to most longboarders, Minority might not have the same sort of skating pedigree that the other longboards on our list do, but that hasn’t stopped them from making a downhill, carving juggernaut that most skaters would give their right arms to ride.

While it’s next to impossible to find out anything about the brand, the proof of the skating pudding is in the carving and this longboard can carve with the very best of them.

Forty inches long and eight and a half inches wide, this eight-ply cold-pressed maple board, has a drop deck to make it easier and more comfortable to ride, double deck cutouts so that wheel rub won’t be an issue that you’re troubled by and can turn in a tighter circle than Ken Block in his purpose-built drift mobile.

And its heavy-duty polyurethane wheels with stainless steel bearings mean that it’ll go like greased lightning, stop on a dime and give you all the control that you’ll need to carve with panache and cruise in style.

Names may mean a lot in the nine to five world, but when it comes to hitting the streets with four wheels and a deck, they don’t mean all that much.

All that matters is how well your longboard cruises and carves, and Minority’s board can keep pace with all of the skating world’s big guns at a fraction of the price they’d ask for a similar ride.

Which Longboard Is The Best Carver For Me?

That question depends entirely on your budget and level of ability.

If you’re just dipping your toes into the world of longboarding and are looking for a board to help you develop your skill set with and learn to carve on, then we’d always recommend that you set your skating sights on Minority’s surprisingly affordable longboard.

If however, you’ve taken your knocks and bumps and just want a longboard that you can cruise and carve around on in style and want to look good while you get to wherever it is you’re going, then you could do a lot worse than attach your skating future to an Atom Drop Through.

But whichever board you chose to carve on, and with, be careful out there, and maybe one of these days we’ll get to cruise and carve the streets together.

What Is A Longboard?

A longboard is a type of skateboard that is often longer than a normal board and comes in a much wider variety of shapes that are designed to accommodate the three disciplines associated with longboarding - carving, cruising, and dancing.

The progenitor of modern skateboarding, longboards were the first commercially available skateboards and were predominantly based on the design of surfboards.

Given that skateboarding was invented and developed by surfers looking for a way to surf when they couldn’t make it to the ocean, the design of longboards isn’t all that surprising.

Easier to ride and control than traditional skateboards, longboards are more popular than they have ever been and have become the board of choice for a new generation of skaters.

Carving is a hangover from the surfing world that has been popularised by skaters as it allows them to propel their longboards (or more conventional skateboards) without having to push them.

It involves a skater making a rapid succession of quick turns on their board in order to build up speed and momentum without having to take either of their feet off the deck.

It’s a quick and effective way to develop balance and encourages skaters to become more adventurous in their approach to their chosen sport and can, and often, does lead to skaters learning new board based tricks.