Darkstar has been a well-known name in the skateboarding industry for over fifteen years. When they first started out, they were originally a wheel company.

Since those humble beginnings, though, Darkstar has expanded its product line to include skateboards, gaining themselves a reputation of being an entry-level brand due to their affordable prices and distribution throughout Walmarts everywhere.

In this article, we’re going to be taking an in-depth look into the history of Darkstar Skateboards, the quality of their products, and whether or not it really matters that they’re considered a ‘Walmart’ brand.

Whether you’re a beginner or a pro, we’ll help you to figure out whether or not a Darkstar Skateboard is the right choice for you. 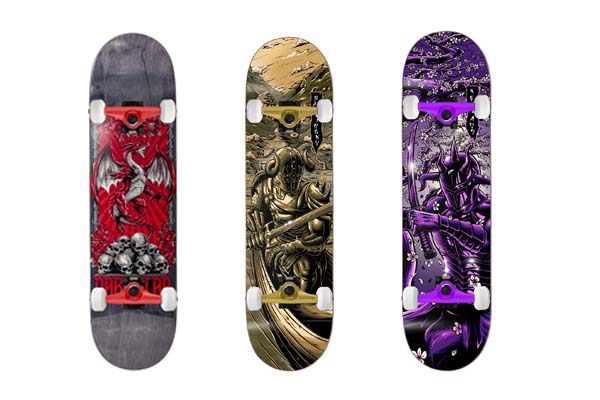 Who are Darkstar Skateboards?

Darkstar is a skateboard brand that is owned by Dwindle Distribution, which you might have already heard of! Dwindle is a huge company that also owns the likes of Almost skateboards, Enjoi, and Dusters California, which are all well-respected and considered to be premium brands.

Founded in 1997 by legendary pro skater Chet Thomas, Darkstar Skateboards originally began life as a wheel company before diversifying into skateboards under the Dwindle Distribution world.

However, in the early days, it was quite a different story! Chet started the skating business off in his garage, but it later evolved into the skateboard deck brand that we’ve all come to know today.

So, why do some skaters dislike them?

In the year 2007, Chet decided to make his products more accessible and affordable and struck a deal with Walmart to begin selling Darkstar skateboards, continuing to this day.

This decision is the reason why many skaters associate Darkstar with the Walmart brand itself which has, for many, stripped Darkstar of a premium edge. However, regardless of this opinion, Darkstar continues to make skateboards of a high-quality that sell.

They even have a sparkling pro team that consists of famous names such as Santana Saldana, Cameo Wilson, and Manolo Robles to name a few.

All of Darkstar’s skateboards are made within Dwindle’s very own manufacturing operation, DSM, which is exclusive to Dwindle’s brands, highly regulated and able to ensure the quality of each skateboard by utilizing a single deck pressing technique, rather than pressing multiple boards together at a time which is common with other woodshop factories.

Each logo, pattern and unique design of Darkstar decks utilize Dwindle’s patented Resin technology which will prevent delamination, which is when layers of veneer that make up a decks construction start to come apart from each other and form a crack or gap, primarily along the edge of the board.

Besides preventing this common complaint, Dwindle’s careful Resin Technology will also increase the board’s pop and overall ‘feel’ while using it. On top of this, each skateboard is designed by Darkstar pro skaters, so you can be confident that you’re getting a high-quality skateboard approved by some of the best skaters in the game.

Demonstrating their premium quality despite opinion, Darkstar skateboards are generally made of 7 ply maple and epoxy resin, which makes them stronger than industry standards.

Not only that, for maximum convenience, but the Darkstar skateboards also come pre-assembled boards are ready to use, so you can get going as soon as your deck arrives at your doorstep, while the inclusion of trucks, bearings, and wheels means that you don’t have to buy any separate parts.

Is a Darkstar skateboard right for me?

It is worth being aware that Darkstar decks do differ in quality, depending on where you buy one from. Generally, the Walmart decks are of slightly lower quality, and this is so that they can slot themselves into an affordable, competitive price point.

The kinds you’ll find at Walmart are also a lot less advanced and easier to use, making them ideal for beginners.

However, if you’re an experienced skater and like the sound of a Darkstar board, you’re better off a higher-quality line of Darkstar boards found on their website or in reputable skate shops.

Armed with one of the more premium Darkstar boards, you’ll be able to roll, turn and you can carry out all the tricks you’d be able to do on some of the more expensive decks for a far more reasonable price.

What are some good Darkstar decks?

As of 2020, Darkstar has introduced plenty of new, performance-enhancing skateboards to cater to a range of abilities. Here are some of their bestsellers:

If you’re a fan of Darkstar, you might recognize the graphics of this all-new 2020 Inception series.

These boards are made with 100% Canadian Maple using Resin-7 Technology in a Single Press, which makes them stronger than industry standard 7-Ply.

Each deck within this high-performing series are made of the highest quality, providing excellent pop that lasts, as well as consistent shape, use after use.

This bestselling series consists of 3 skateboard decks. The Deconzo Inception Deck offers an eye-catching twist on the Darkstar logo, featuring the iconic Darkstar Knight battling a red dragon in a bright red colorway.

Another bestseller is the pretty pink Lutzka Series. Each deck is made of Resin-7 Canadian Maple and features a full concave with a steep kick, which means that you can put plenty of pressure on the edges of these decks to improve steering and allow you to flip the board easily.

The ply is stronger than industry-standard 7-ply (all thanks to Dwindle regulated creation process) and boasts both a strong pop and longer deck life, making any deck from this series an ideal choice for intermediate skaters looking to take their technique to the next level.

Darkstar’s playful spirit can be seen from the interesting deck art, which consists of different drawings including a watermelon, a skull, and cherries, depending on which deck. They also feature humorous phrases such as, ‘hold my beer’.

Get your hands on a gem of a deck at a fraction of the cost with the Darkstar Diamond Series, featuring two boards in either a gold/silver colorway or aqua colorway.

You can get your hands on one of these boards for under 40 dollars, which is cheaper than the average price.

Each board is made with Resin Hybrid Technology, featuring a single press making them stronger than industry standard 7-Ply.

Resin Hybrid decks are of the highest quality, providing excellent pop that will help you unlock your skating potential.

Sure, Darkstar might not be the leading skateboard brand out there, but they do have a pretty strong pro team, and they’re owned by Dwindle.

This sets them leagues apart from lesser-known skateboard brands, and some could even argue that Darkstar’s skateboards are as high quality as some of Dwindle’s powerhouse brands, except at a much more affordable price.

A bunch of younger skaters has been able to get decent beginner boards, all the while creating performance-enhancing decks made of the strongest ply and used by some of the best players in the world. How could you not be a fan?

If you’re an experienced skateboarder, you’ll get a lot of use out of a more expensive Darkstar board.

However, if you’re a beginner-intermediate player or buying for a teenager working on their technique, a Darkstar skateboard from Walmart is a choice that no one could turn their nose up to.

They’re high-quality, long-lasting, and are built of durable materials that will withstand regular use with no issues. Our verdict? Darkstar is definitely a skateboard brand worth considering, and an underrated skateboard brand at that.