Enuff skateboards may have started small, just in the UK, but since they came about in 2006 they grew super rapidly and now distribute their skateboards internationally, including here in the US.

The reason for such rapid growth?  A strong focus on making their boards more affordable, without sacrificing quality. But that was never their sole focus.  They also aim to promote skating by holding skating demonstrations whenever they can.  And better yet they aim to be environmentally friendly, retrieving the maple for their decks only from sustainable sources.

In terms of the quality of the parts in their completes, Enuff ticks all the boxes.

They’ve got good trucks, wheels, and bearings, and they use 100% Canadian Maple in their decks to make them strong and durable.

Enuff skateboards tend to be more popular with the younger skateboarding community, which is largely down the board’s funky graphics and artwork.

The artwork focus ranges from edgy cartoon figures in the street, graffiti, color fades, and paint splatters, right the way through to colorful geometric patterns, and more intricate imagery of powerful characters.

In terms of what they’re like to ride, skaters say that although they aren’t quite on a par with higher end skateboards, they’re perfect for those with more modest budget, and are much quicker for youngsters to save up for.

Their more affordable price point also makes them a good choice for those just starting out in skating, who aren’t ready to part with quite so much money for higher end alternatives, but who want something of higher quality than your cheap plastic penny boards.

And while this article is going to concentrate on completes,  it’s worth noting that when making custom builds, Enuff parts are very frequently sought after.  And this includes their ABEC9 bearings, their Enuff Corelite wheels, and their Enuff Decade trucks.

Ok, we’ve given you a bit of an overview now, let’s look at some specific boards. 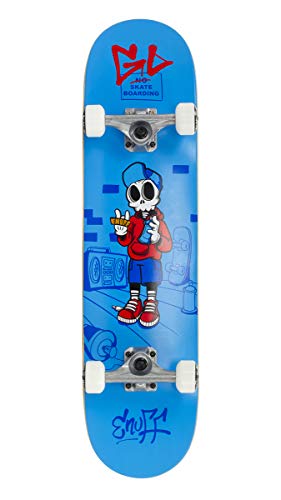 The Skully board is a great example of Enuff’s trademark character inspired graphics, simultaneously edgy and retro.

The Amazon link should take you to the regular size, but it’s worth noting that you can also get a mini with the exact same graphics.  But it’s probably not worth looking at that because it’s only slightly smaller than the regular size anyway.

The regular has a length of 31.5 inches and a width of 7.75 inches.  The wheelbase isn’t measurement isn’t indicated, even on the manufacturer’s website, but to be honest it looks pretty standard.  The deck is composed of 7 ply of real maple, so it’s very sturdy and stable.

There’s a mild kicktail and raised nose, while the rest of the board remains flat.

All in all its a fantastic board for beginners looking to give the sport a go, they can cruise away and hop the curbs.

The wheels are 54mm in diameter, which is ever so slightly smaller than average skateboard wheels, and is a good size for beginners.  Nice and stable, and suitable for trick riding and for skating street, in skate parks, and in bowls.

The rest of the board is all made from top quality parts too - 129mm Enuff Decade Trucks, White PU Cast SHR 96A bushings, and very nice ABEC-9 Carbon bearings.

All in all it’s a great board that young beginners will love. 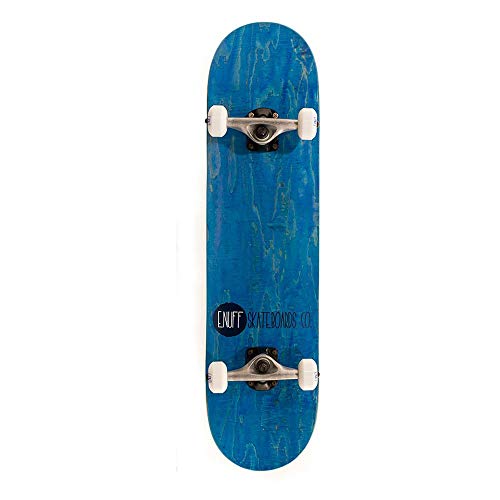 If however you find such graphics a little dated or over the top, then you might like something like this instead.  Plain on the top of the deck, and a nice blue stain on the underside.  (It’s also available in other colors besides.

The deck is the same size as the Enuff Skully, with a length of 31.5 inches and a width of 7.75 inches.  It’s a standard sort of size really, and as such it makes a great board for both beginners and improvers, who want to concentrate on their technique before experimenting with different sizes and shapes of board.

The deck is made with 100% genuine Canadian Maple, and as such is very durable and stable.  There’s also a medium size concave shape to the deck which really helps with feet placement.

As for the wheels, they are 53mm in diameter, which is again kind of borderline between being small and being about average for a skateboard.  It’s a good choice for smaller riders, and can be used in trick riding and for skating street, in skate parks, and in bowls.

The durometer rating of the wheels comes in at 55D which is very very soft, which unfortunately means you’re not going to get as much wear out of the them, but on the flip side, this means they are lighter, and they give you a quicker, more responsive pop, which is perfect for street and technical skating.

The rest of the board is all made from top quality parts too - 129mm Enuff Decade Trucks, White PU Cast SHR 95A bushings, and nice ABEC-7 Chrome bearings. 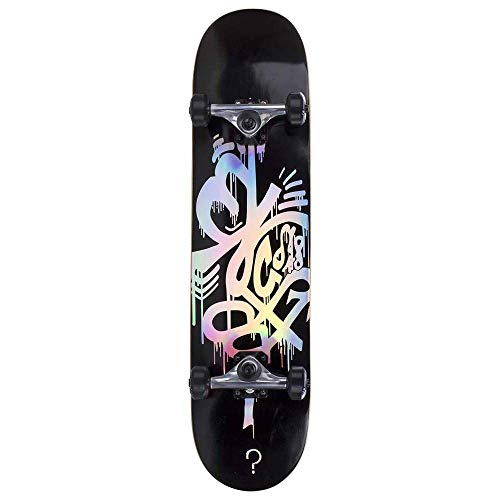 If you’ve seen the photo of this board, you will have noticed the funky graphics on the underside of the board - pale, dripping graffiti done with reflective paint against a jet black background.  It looks very striking in certain lighting conditions.

And it’s a board that functions as well it looks.

It’s larger than the other Enuff boards we’ve shown you so far, with a length of 32 inches and a width of 8 inches, so it’s great for those with larger feet or who like to have plenty of room for their feet on the board.

And it can take a greater weight of rider too.  I can imagine a great many younger riders overgrowing the Skully board and moving on to this one instead as they grow older.

The deck is built with 7 ply of %100 genuine Canadian maple, making it good and strong, but with enough flexibility in it to start to push the boundaries a little to allow improvers to work on their tricks and do a little more than merely cruise the streets and skate parks.

The deck has a kicktail and a raised nose, which is a big help when you want to do tricks or hop over curbs.

The wheels have a diameter of 53mm, which, again is a little small but isn’t far off the average.  Some would argue that they’re a little small for this size board though.

The durometer rating of the wheels is 99A, which is about the perfect level of softness for a skateboard.

The rest of the board is all made from top quality parts too - 139mm Enuff Decade Trucks, White PU Cast SHR 95A bushings, and nice ABEC-7 Chrome bearings. 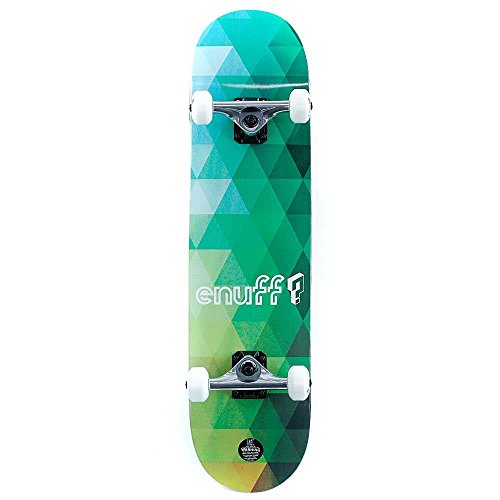 Another board with stunning graphics - geometric shapes in a gradient color change from edge to edge.

It’s the same size as the hologram board, with a length of 32 inches and a width of 8 inches, giving you plenty of room for your feet, even if you have big feet.

The deck is built with 7 ply of %100 genuine Canadian maple - a good, strong board with medium flex.  The deck has both a kicktail and a raised nose, which is perfect for tricks and curb hopping.

And the centre of the deck has a concave shape, which is great for foot placement, and feeling safe and balanced on the board.

The wheels are 53mm in diameter, so that’s slightly small but not too small.  It’s a good choice for smaller riders, and can be used in trick riding and for skating street, in skate parks, and in bowls.

The durometer rating of the wheels meanwhile, is 55D, which means that they are very soft, and softer than what you would get with a longboard, which is very unusual.

But it's good because it makes it a street board, able to provide a smoother ride over rough surfaces like sidewalks and roads, and provide a better grip on the ground.

The rest of the board is all made from top quality parts too, including 129mm Enuff Decade trucks, White PU Cast SHR 95A Bushings and ABEC-7 Chrome bearings.

There may not be a lot of variety and versatility across Enuff’s range, but their product offering in terms of their completes (not just parts) is quite uniform in how the board is built and therefore in how it performs.

Their range is slightly more tailored to beginners, improvers and the younger generation, but that said, that’s a very large proportion of the skateboard market.

And there’s something here for both complete novices and for those regulars at the skate park who are looking to work on their skills and make an impression.

With their wide range of good looking graphics, there’s something there for everyone’s taste.  They have a lot more available than just the ones we’ve shown you here today, you should totally check them out.